The best Pearly Gates Joke I have heard

The pope arrived at the pearly Gates and Saint Peter greeted him and quickly told him that it was very difficult to get an audience with God. The Pope said he did not mind because when he was alive he had the same problem.

They chuckled together over this and Saint Peter said he realized the pope was probably anxious to know a few things judging from the number of times he prayed for guidance. The pope agreed saying that he had a real hankering to see the original Scriptures.

So Saint Peter showed him to the room where the original manuscripts were stored. He left the old gentlemen there to search them out and soon forgot all about him.

A while later he heard a great wail coming from the room. Saint Peter went to investigate and found the Pope in an awful sweat.

Saint Peter asked the Pope what was wrong and this loud pitiful voice replied : 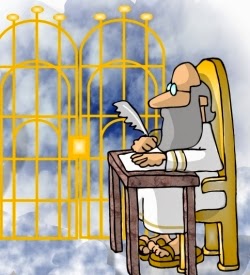